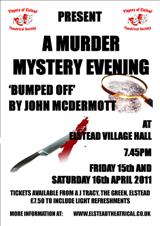 Colonel Sir Rodney Gung-Ho, a retired army officer dedicated to huntin', shootin' and fishin' and his good lady wife, the inimitable Lady Phyllis Gung-Ho decide to invite some friends round to their country home. The Colonel, who is not fond of visitors at the best of times, faces the prospect with a stalwart acceptance born of years under his wife's cultured but insistent thumb. His one ally in this life is Stanley Binge, the family butler and his former batman from army days.

Before the evening is over sinister events occur and one or more of the party becomes a murderer whilst another becomes their victim. You are the detective. With the clues played out during the performance you and your team have to decide who is guilty. If, as the play continues, you are correct you and your team will win the evenings prize. Good Luck!

Advance Tickets are available from A.J. Tracy & Sons, The Green, Elstead, from the 21st March. They will also be available on the door.