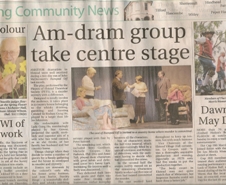 AMATEUR dramatists in Elstead were well received during a two-day run of John McDermott's 'Bumped Off' last month.
The play, performed by the Players of Elstead Theatrical Society (PETS), is a murder mystery with a difference.
Designed to totally involve the audience, it takes place in a country house belonging to the whisky drinking, gambling and hunting Colonel Sir Rodney Gung Ho, played by a larger than life Jos Johnston.
His redoubtable wife Lady Gung Ho, convincingly played by Sue Gowar, projected the spoilt, snobbish and superior airs of a wife who has total control, or so she thinks, of her family, her husband and her country home.
Things change when they decide to invite a number of guests for a family gathering and the house is enveloped in murder and mystery.
Events are overseen by the Colonel's only ally, his former army batman, and now butler, Stanley Binge - a wonderfully doddery and whisky-imbibing servant played with flair by Peter Samuel.
The remaining cast, which included Terry Gardiner, Michelle Cooper, Kay Padwick, Phil Ellis and Anne Tull, played their characters with great relish and delivered some very funny lines, increasing the tension until a body was discovered.
They delivered their lines with gusto and there was some fine timing and humourous verbal interplay between all the characters.
Not all characters made the half time interval, which was entertainingly filled by a quiz of television and fictional detectives, with the audience having to decide who committed the crime.
In the second half the events swiftly moved on as the remaining characters finally worked out that one of them had indeed committed the murder.
The cast worked hard throughout to keep the tension, but with much humour.
Vice Chairman of the Elstead Village Hall committee Lu Cooper, said: "It was a thoroughly enjoyable production and evening, especially as PETS only had five weeks to put the production together.
"The body count in Elstead may not quite match that of Midsomer, but Inspector Barnaby could not have done a better job."