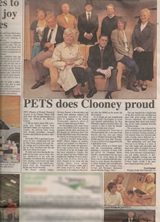 PETS (Players of Elstead Theatrical Society) lit up Elstead Village Hall with three sell-out performances of Cash On Delivery by Michael Cooney.
A full on, frantic farce with everything you would expect from Michael's father, the legendary Ray Cooney, the evening raced along with double entendres, dropped trousers and hilarious mistaken identities.
Set in the 1990's it presented a portrayal of how complicated life can be. Eric Swan (played with real relish, energy and excellent comic timing by Terry Gardiner) has lost his job at the electricity board.
To make ends meet during the two years he has been out of work, Eric has, unbeknown to his wife (an admirably bewildered Pen Bicheno) been creating complicated and fake lives of lodgers to get benefit payments from the Department of Health and Social Security.
The Swans' current lodger, Norman Bassett, a downtrodden and simple shoe salesman (played with convincing conviction by Philip Ellis) is complicit in the Fawlty Towers-style spectacle which is about to ensue and engulf them.
On the morning of the chaos Swan phones the DHSS to try to cancel the payments he has been receiving for Mr Bassett by informing them tht he has died from Lassa fever and that his family are distraught but coping.
A knock at the door brings forth a DHSS Office Jenkins (a suitably definite and pedantic Jos Johnston) a jobs worth who wants the right people to sign various forms. Swan has to pretend to be an old lodger who has since returned to Canada. But having signed the form Jenkins now requires the landlord Swan to authorise the form. So Swan tries to convince Bassett to be Swan for the signing. Swan's Uncle George (played with obvious relish and a deft comic touch by Peter Tull) is introduced as the helper in the cover up with the DHSS as he works for the hospital.
As if things are not complicated enough Sally Chessington (a funny and assured performance by Kay Padwick) a grief counsellor from the council, is sent to help the Bassett family in their time of grief.
She is introduced to Swan who is Thomas Bassett who is the son of the Basset who has died and whose name is William Richard alias Willie Dickie and also alias John Thomas. To top it all Bassett is supposed to be a deaf piano tuner.
The plot unfolds at a frantic pace and the complications multiply, reaching a crescendo of chaos with the arrival of Dr. Chapman (Peter Jewell) a psychologist who has been called to the Swan house by Mrs Swan who is convinced that her husband is a cross dresser, the undertaker (Peter Samuel), the over-efficient DSS Inspector Ms Cowper (Sue Gowar) and Norman's distressed fiancee Brenda (Peggy Tilly)!
The cast handled the complexities of the plot and the fast and hilarious pace with great energy, relish and obvious enjoyment, ably conveying the ensuing utter chaos and extracting all the comic potential from the excellent script.
The production was enhanced by some excellent props and effects, not least an itinerant washing machine, a very realistic body on a stretcher and with a timely nod to Hallowe'en, a mummy walking around the stage!
This production well and truly lived up to its billing as a farce. It was very funny and enjoyable and there were gales of laughter from an audience that obviously relished every twist and turn, misunderstanding and double entendre. A thoroughly enjoyable evening was had by all and this was a production the Cooney family would, I am sure, have enjoyed and have been proud of.

Director Denise Cleaver got the most out of the actors in this Michael Cooney farce which well and truly entertained the audience. Terry Gardiner (Eric Swan) on stage for most of the play gave a hilarious performance, he was ably supported by Philip Ellis (Norman Bassett), the two characters gave the packed audience a lot to laugh about.

Jos Johnston (Mr Jenkins) was truly believable as the inspector from the DHS investigating Eric’s benefits. Good performances by Kay Padwick (Sally Chessington) and Sue Gower as the formidable Ms. Cowper, ably assisted by the rest of the cast, who all gave creditable performances. A great success, congratulations Players of Elstead for a very enjoyable evening.