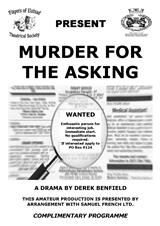 Murder For The Asking

A Murder Mystery To Keep You Guessing To The Very End

All Henry Scrubb wanted was a job. Something to do between nine to five , Monday to Friday. A way to distance his family from the financial crisis he has found himself in. But answering a job advert in the local paper turns out to be a major mistake. For one, the interviewee insists on meeting Henry at his place; another is Henry's wife Dora must be out of the house and know nothing of the meeting. But what is this job that appalls and shocks Henry to the core? Why does Henry flatly refuse and force the potential employer out of his house only to find himself being questioned by the very resourceful Detective Sergeant Thatcher, who is doggedly determined to get to the truth. The twists and turns of this well-structured and intriguing play keeps the audience on the edge of their seats as the plot escalates to its thrilling climax. In association with Samuel French