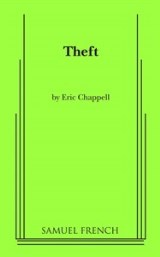 A Play By Eric Chappell

Imagine that you returned home from a sumptuous dinner with your best friends, only to find your vast estate ransacked and your most valuable possessions stolen. This is exactly what happened to John and Barbara Miles when they celebrated their wedding anniversary and returned to their remote estate.

John being a successful, determined and wealthy man does not take this lightly, though thankfully it seems they never found the safe.

Barbara is less fervent about the robbery and wants to know why Trevor seems totally incapable of actually taking his wallet out of his pocket and why doesn't she know the combination to the safe.

Trevor, John's childhood friend, though distraught about the robbery wants to appease everybody and keep things on track. But then again he didn't even know John had a safe; let alone what's in it.

Jenny, Trevor's wife, though very upset about the robbery seems more upset that the thief deemed her anniversary present to John and Barbara unworthy of stealing; and she doesn't even care about the safe.

With guilty secrets and everything to lose these very different people play an escalating and hilarious game of cat and mouse as over the next few hours two seemingly happy marriages and one very close friendship, come tearing apart at the seams.

Eric Chappells deft touch keeps the drama bubbling and the comedy flowing in a play that will keep the audience enthralled from curtain rise to curtain fall.

In association with Samuel French