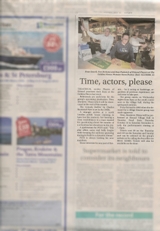 'Time, Murderer, Please' Press Release that appeared in the Surrey Advertiser on the 11th October 2013

Theatrical society Players of Elstead practised their lines at the Golden Fleece last week.
Rehearsals are underway for the group's upcoming production Time, Murderer, Please which will be showcased at the end of this month.
The 'comedy thriller' by Charles Raymond Dyer is set in the 1960s.
A stranger arrives at a north London public house claiming to have lost his memory, but bearing a close resemblance to a man wanted for questioning about the murder of a schoolteacher elsewhere in the city.
A spokesman for PETS said: "This plays offers some real belly laughs while keeping the audience guessing during its build to a dynamic climax."
PETS is always looking for new members.
Those interested in any part of theatre - be it acting or backstage, regardless of previous experience, are welcome to take part.
The group meets on Wednesday nights from 8pm at the youth centre next to the village hall, during the spring and autumn.
It was formed in 1982 when demand for a village theatre group was made apparent.
Time, Murderer, Please will be performed at Elstead Village Hall in Thursley Road from Thursday 31st October to Saturday 2nd November, with the performances starting at 7:45pm.
Tickets cost Ł9 on the Thursday and Ł10 on the Friday and Saturday and can be ordered on the group's website or by calling the box office on 08442 329460. Tickets will also be available on the door.