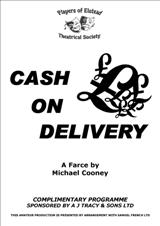 Michael Cooney's riotous farce has all the ingredients for rib-tickling hilarity! Eric Swan (aided by his Uncle George and unbeknown to his wife, Linda) has pocketed thousands of pounds through fraudulent DSS claims. When Norman Bassett (his lodger) opens the door to Mr. Jenkins, a DSS Inspector, deceptive mayhem follows - as do the undertaker, bereavement counsellor, psychiatrist, Norman's fiancee, a corpse, the ominous Ms Cowper and a rather rebellious washing-machine. A frantic Linda meanwhile consults Dr. Chapman regarding the discovery of her husband's bra, corset and stockings (all part of his swindling activities)! This fast-paced comedy offers a colourful selection of characters and a whole heap of laughs.

Advance Tickets will be available from the 3rd October 2011 from The Elstead Newsagents, Thursley Road. They will also be available on the door.